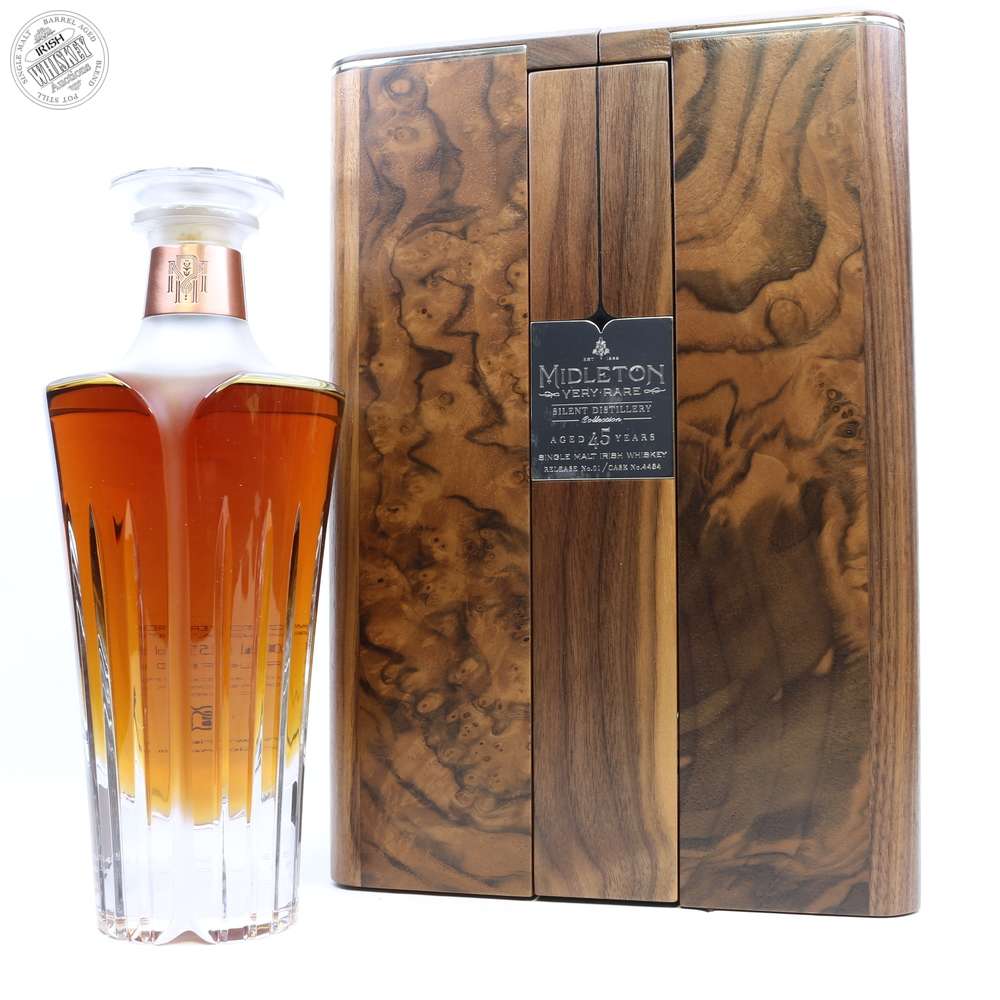 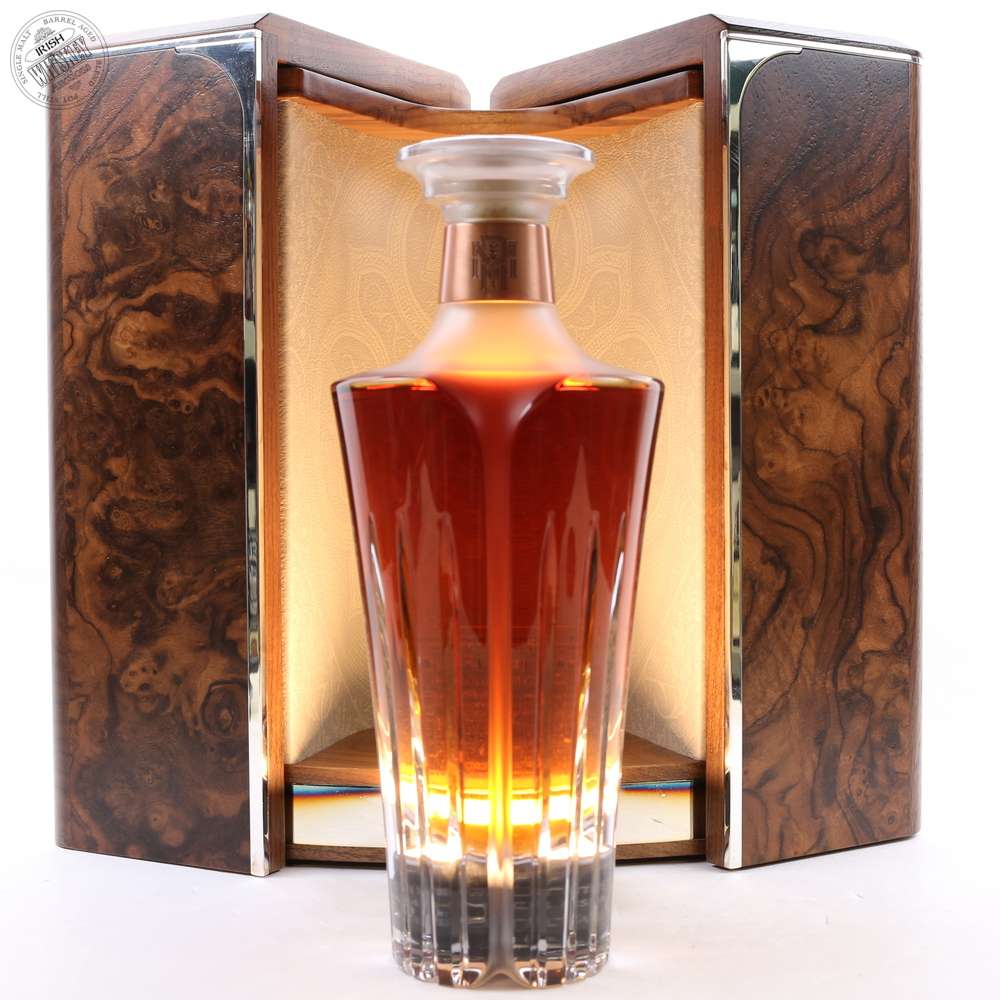 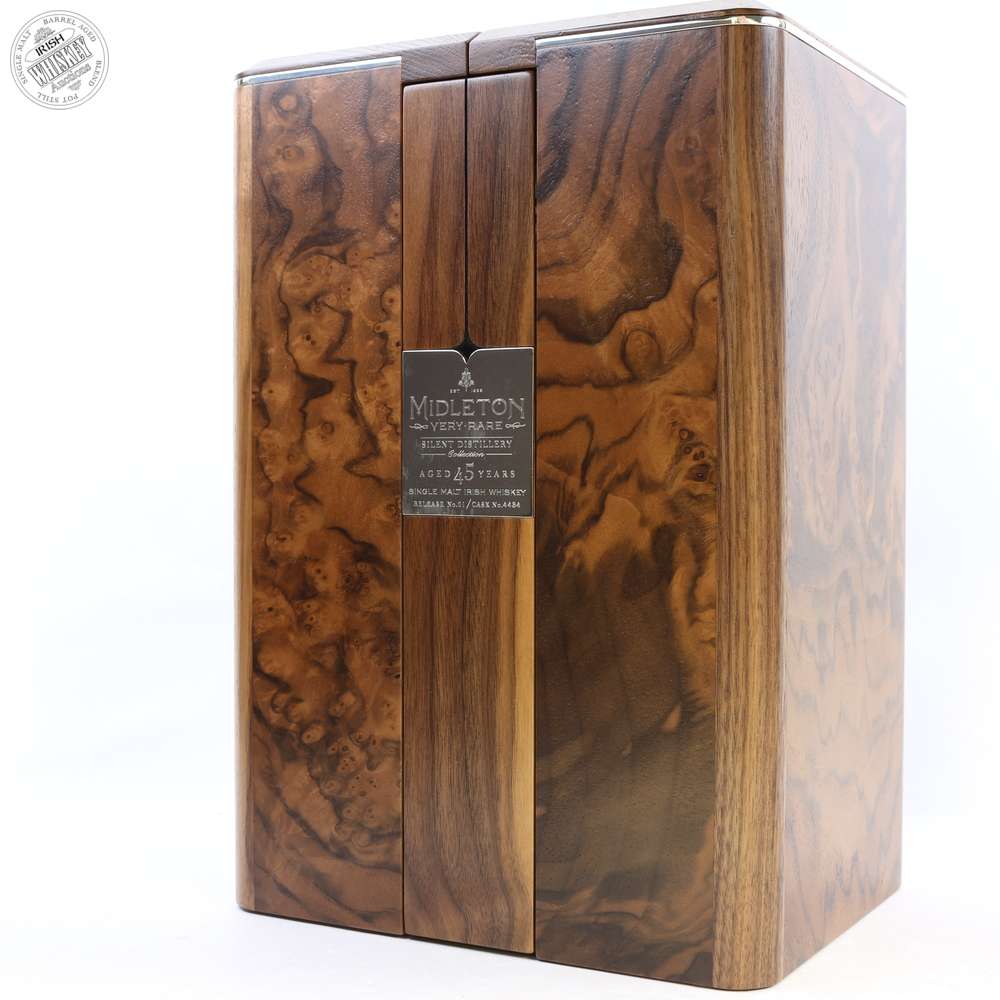 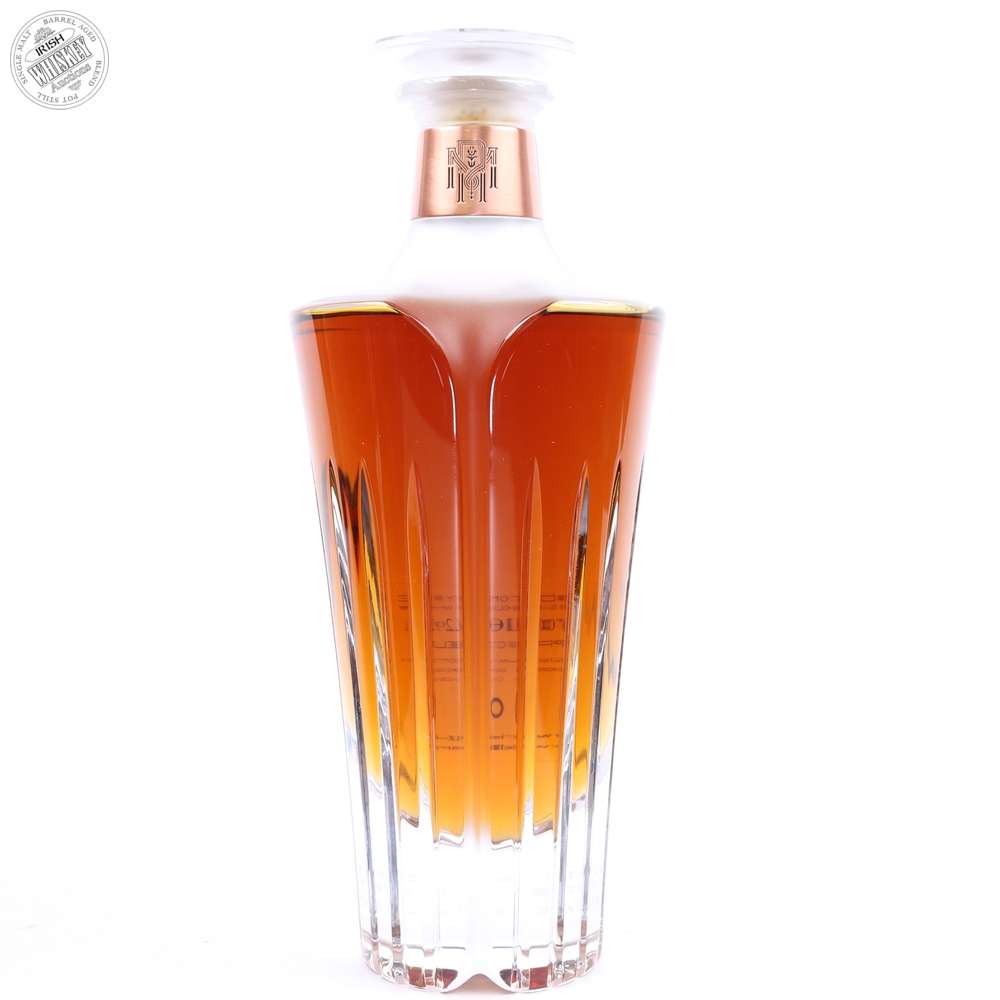 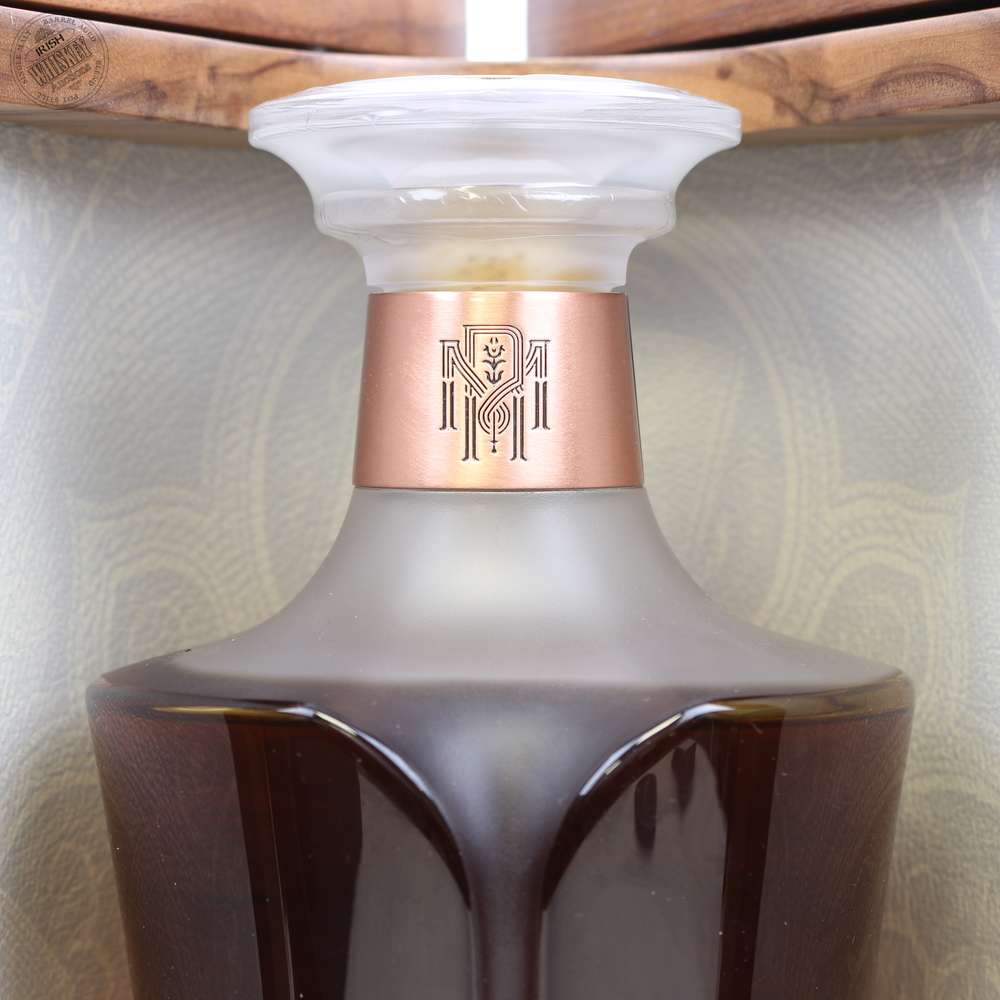 The Ultra rare Midleton 45 Year old Peated Single Malt Irish whiskey from the now closed Old Midleton Distillery. These 48 bottles will become one of the most sought after bottles in Irish whiskey.

This once in a lifetime opportunity to own the very first bottle from the upcoming Silent Distillery collection from Midleton. Each bottle is presented in a hand cut crystal decanter and displayed in a bespoke walnut case. Each bottle comes complete with a detailed history and tasting notes from the generations of dedicated staff at Midleton that make this bottle so Unique.

Taken from the Midleton Press Release:

A ‘silent’ distillery is one that has closed its doors and been lost to ages past, achieving almost mythical status. As rumours of this ‘unicorn’ whiskey swirl around the whiskey world, these precious bottlings have become highly sought after by whiskey enthusiasts. A traditional distillery, Old Midleton Distillery was famous throughout the world for Irish whiskey, but when it closed its doors for the last time in 1975, it became an iconic part of Irish distilling legend.

While other silent distilleries have re-opened and been brought back to life, Old Midleton has been fully decommissioned and will never produce again. Midleton Very Rare Silent Distillery Chapter One will be the first official release from Old Midleton Distillery in 16 years and the collection represents some of the last drops of this inimitable spirit before the distillery closed its doors forever.

When the spirit for Midleton Very Rare Silent Distillery Collection Chapter One was laid down in 1974 under Master Distiller Emeritus Max Crockett, a year before the closure of Old Midleton Distillery, it was part of a series of innovative trials never to be released or repeated. Crockett’s experimentation with peated single malt whiskey from 1964 to 1974 will come to light for the very first time through this release which paves the way for new beginnings in the world of ultra-rare, luxury Irish whiskey.

Midleton Very Rare Silent Distillery Collection Chapter One is the only release in this collection to have been created as a peated single malt – pure innovation for Irish whiskey at the time, and rare still today. Decades in the making, the third-fill sherry cask that has influenced this whiskey has been lying dormant for 45 years. This makes it one of the world’s rarest whiskeys by its very nature. The cask contributes notes of ripe honeydew melon, red berries and sweet spices of toasted oak.

Master Distiller Emeritus Barry Crockett, son of Max Crockett, recalls sourcing the peat for this 45 year old expression, which will be the last peated whiskey ever from Old Midleton Distillery. During this time, Barry was learning his trade from his father, Max Crockett, the ‘forefather’ of modern-day Irish whiskey. In recent years it has been the work of Master Distiller Brian Nation to monitor, sample and determine the ideal bottling time for this rare whiskey laid down by his predecessors. Midleton Very Rare Silent Distillery Collection represents a unique opportunity to taste the work of three legends.

Staying true to its proud Irish heritage and luxury craftsmanship, Midleton Very Rare Silent Distillery Chapter One will be decanted into handblown and etched crystal decanter bottles, produced by Ireland’s Waterford Crystal, with each of the bottles individually numbered. The bottle comes displayed in a wooden cabinet handcrafted by Irish designer, John Galvin, using wood up to 200 years old from ancient reclaimed whiskey vats. This further cements Midleton Very Rare Silent Distillery Collection as the ideal treasure for any whiskey enthusiast.

Barry Crockett, Master Distiller Emeritus: “It’s remarkable that 45 years on we could even be speaking about a whiskey which was distilled in the very final period of the Old Midleton Distillery. It is the ultimate heirloom and memento of the dedication to precise malt preparation, brewing and distillation skills of generations of distillers at Midleton. Furthermore, it’s among the very last remaining whiskey distilled through the largest pot still in the world, a skill which in its own right required great refinement of the distiller’s art.”

Brian Nation, Master Distillers at Irish Distillers: “One of the most wonderous parts of my job is that I am often responsible for safekeeping the legacy of another. For many years now, my colleagues and I have been caring for the work of Max and Barry Crockett, to determine the optimum time to share it with the world. The team at Midleton Distillery is extremely proud that the time has finally come to introduce the Midleton Very Rare Silent Distillery Collection.”

Brendan Buckley, International Marketing Director at Irish Distillers: “At a time when Irish whiskey is booming and aged stock is extremely limited, we are privileged to have the opportunity to launch this piece of history. The work of three Irish whiskey legends – Max Crockett, Barry Crockett and Brian Nation – this is truly a new chapter in Irish luxury.”